For 35 years, this plaque has been displayed on a post in front of the AL. Ringling Mansion. We hired a local mason this year to construct a base to embed the plaque for a nicer setting. The stone bricks were sourced from the foundation of the carriage house that was built along with the Mansion in 1905.

As a side note, that carriage house was torn down in 1948 to construct a ballroom (later known as the Lou Ringling Ballroom) that was converted to the brewery taproom that it is today.

“The Al Ringling Home – This red-stone mansion was erected by Al and Lou Ringling in 1905. In its day it was the most spacious and beautiful home in Sauk County. After Al’s death Lou remained for several years then moved east, later to return to live in another house in Baraboo.
The Ringling’s sister Ida, and her husband Henry W. North and family then occupied this house. Their sons John and Henry managed the circus after the Ringling Bros. died.

Of the seven sons Al was the ‘circus genius’. At first Lou served as snake-charmer, later became an outstanding equestrian. Always she was the friend of every person traveling with the show.

AL. and Lou are buried in a mausoleum in Baraboo’s Walnut Hill Cemetery.

It’s that time of the year, and starting today, we change tours to appointment only. If you would like to tour the beautiful AL. Ringling Mansion, simply call 608-448-7455 to schedule your personal guided tour!

Starting Saturday, August 1st, we will be requiring our guests who are taking the guided tours to wear a mask indoors to follow the Wisconsin statewide mask mandate due to COVID-19. If you have a medical condition or special circumstances that inhibit your breathing with a mask on, please let us or your tour guide know in advance so we can accommodate you.
We are back to holding daily guided tours from 11am – 4pm, every hour, on the hour, with the last tour beginning at 3pm.
Thank you all for your understanding and cooperation!
AL. Ringling Mansion 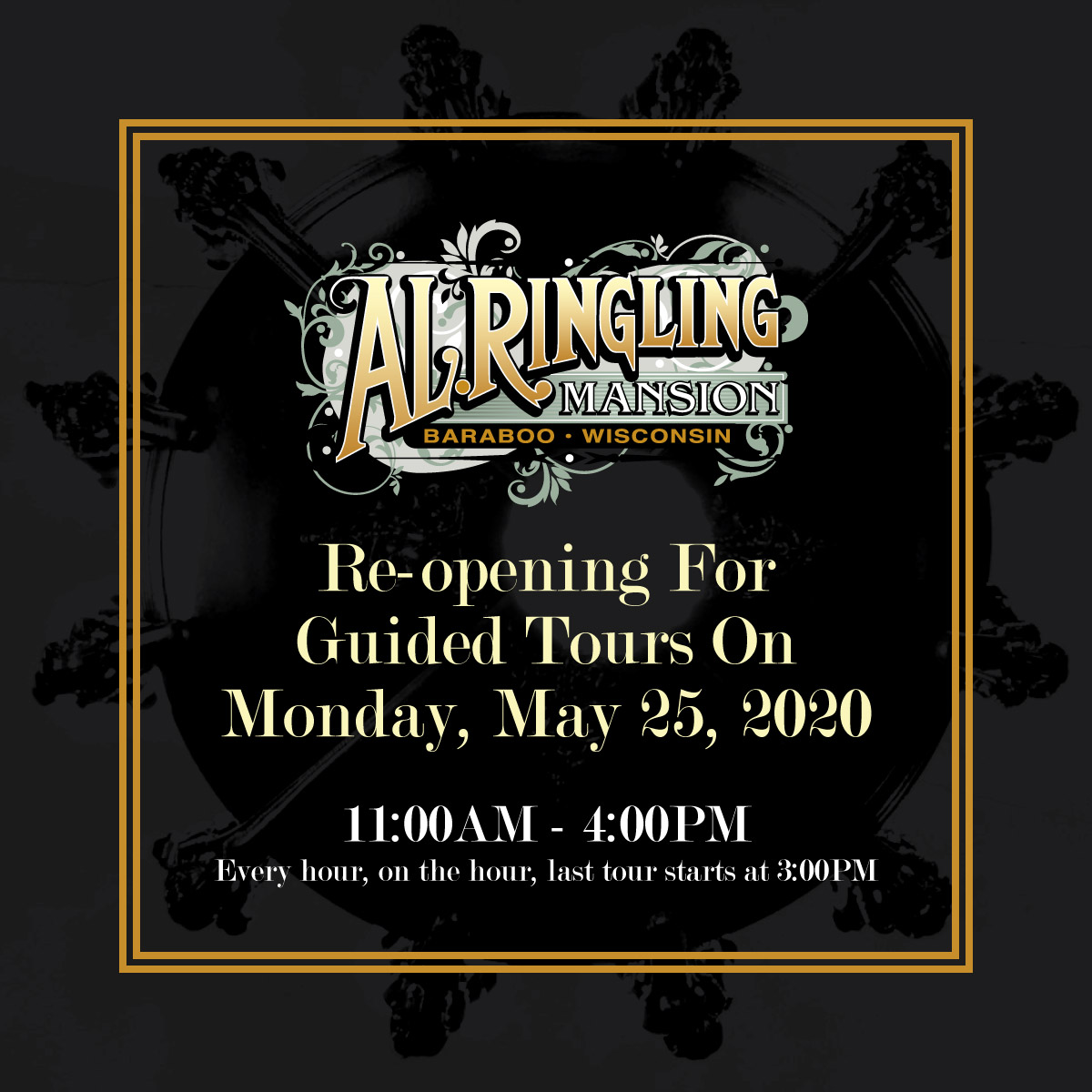 Your presence has been greatly missed at the AL. Ringling Mansion, and we’re happy to announce that our doors will be open for guided tours on Monday, May 25th. Our times will be the same 11am – 4pm, every hour, on the hour, with the last tour beginning at 3pm.

We are using the following guidelines for the safety of both our guests and our tour guide to limit the spread of COVID-19 and other illnesses:
Cash or credit cards are acceptable forms of payment, but credit cards would be most preferred at this time. Group tours are currently limited to eight people to allow for physical distancing. [August 1, 2020 Update: Masks are required to be worn by both staff and guests to due to the Wisconsin mask mandate.] . We are increasing the frequency of cleaning/sanitizing our restroom, hand railings, door knobs, etc.

Please note that if you are having any symptoms of illness, we invite you to come again on other day. We hope that all of our guests can be patient and understanding as we adjust to our new “normal”. See you soon!

We recently received our gigantic serving tanks that are currently taking up space in the new taproom. They'll eventually be moved to the lower level. #alringlingbrewingco #behindthescenes

We began renovating the Lou Ringling Ballroom this past winter of 2019. What was once the ballroom floor is now known as the taproom floor. A few walls have been knocked down to make good use of the space, and new framework has been set up to map out new spaces such as restrooms and a new lobby.